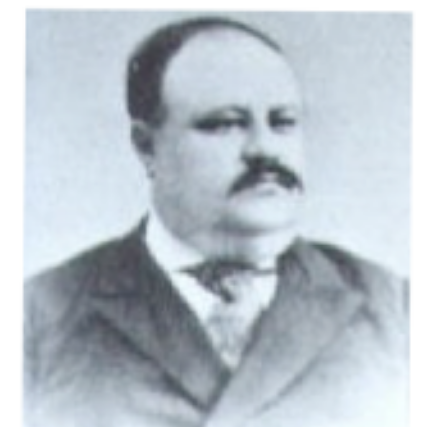 Louis J. Martel was born in St. Hyacinthe, Quebec, Canada. Dr. Martel came to live and to practice medicine in Lewiston, Maine in 1873. He became a naturalized citizen of the United States in 1879 and urged his fellow countrymen to do the same, frequently helping them financially to do so.

Dr. Martel was very active in the local community. His hard work and dedication to the needs of the local citizens was seen in many areas. He was a leading force in the founding of St. Mary's Hospital. He was also co-founder of Le Messager, a French newspaper published in Lewiston from 1880 to 1966. Dr. Martel was founder of l'Institut Jacques Cartier, an organization which help immigrants of french extraditions to settle in Lewiston. A brick building, corner of Walnut and Bartlett streets, was his last Lewiston home.

The Franco-Americans citizens urged city officials to name this school in honor of Dr. Martel. Members of l'Institut Jacques Cartier presented a framed photograph of Dr. Martel, together with a brief record of his activities to be displayed at Martel School. They hope that Dr. Martel's examples will serve as inspiration to pupils of this school, that, they too, may devote some part of their lives to the betterment of this city and its residents.

Welcome to the SchoolBlocks
self-guided tour!

The most common question we receive is, how is SchoolBlocks inspired by Pinterest? SchoolBlocks eliminates navigation bars and uses a block style layout that’s similar to Pinterest. It creates a unique and engaging browsing experience, optimizes for mobile and removes a lot of navigational complexity.

Please click on the red plus signs found on this page to learn more about specific features.